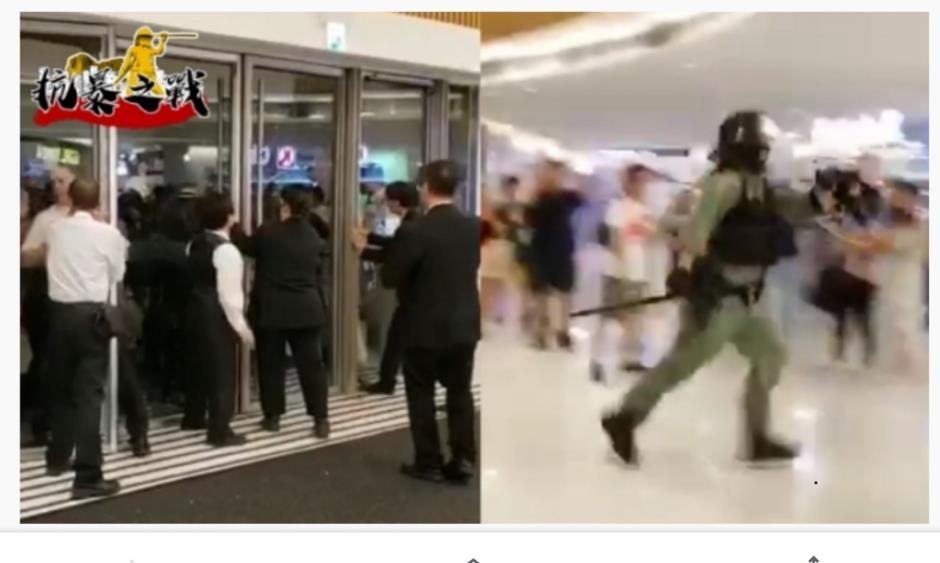 On October 7, despite the security guards of MOS Town at Ma On Shan, New Territories, tried to dissuade the police from entering the private property without search warrant, the riot police entered into the mall by force and caught at least one citizen.
Remark – relevant 5 security guards of MOS Town were charged “obstruct a police officer in the execution of his duty” by Shatin district, Hong Kong Police, on October 9, two days after the incident.

中文讀者請按此連結閱讀中文版本。 Junius Ho Kwan Yiu was a member of the Hong Kong Legislative Council, who was notorious for colluding with triads and pro-Chinese forces. The following list describes every action Junius Ho has taken against Hong Kong citizens: 1. Planning and encouraging a terrorist attack Junius Ho was responsible for inciting triad members in Yuen Long to conduct a terrorist attack on 21st July, 2019. At 23:00, these triad members cooperating with Junius Ho, wore white clothes and attack pedestrians using rattan cane on the street and passengers in the Yuen Long Rail Station. This terrorist attack caused 45 injuries, in which 6 people were severly injuried. At that night, Junius Ho was found in Yuen Long in locations where the terrorists gathered and prepare for attack. He gave the terrorists appclause, shake hands with them and appreciated them by calling them "Heroes". Please refer to our backup footage stored in streamable for on site events: Streamable Junius Ho was questioned by numerous media after the attack. However, he insist to appreciate the terrorists&#39; effort in "Protecting their homeland", and categorised normal train passengers as "Rioters". These actions showed his support on using terrorism to fight against Hong Kong citizens. 2. Threatening others (especially members of councils) on a large scale After the Yuen Long terrorist attack, countless citizens were angered by Junius Ho&#39;s shameless act. On the following 2 days (22nd - 23rd July), citizens protested in 3 of this office, located in Tin Shui Wai, Tuen Mun and Tsuen Wan. On 22nd July, protesters broke the glass wall of his office and damaged the CCTV in it. The remaining walls were filled with protesters&#39; message. After the protest, Junius Ho accused a Tsuen Wan District Council Member (Tam Ho Pong) for executing this "attack" of his office without providing any evidence. He claimed to had ordered an arrest of Mr. Tam, although nothing happened following this threat. On the next day, his parents&#39; graveyard located in Tuen Mun was destroyed. The walls of the graveyard was sprayed with the words "Government Collude Triads". Following the destruction, Junius Ho went live on Facebook and publicly accused a member of Legislative Council (Eddie Chu Hoi Dick) for planning the destruction. He threatened Mr. Eddie Chu in his Facebook live by claiming he could be "not-living", which literally means a death threat. 3. Great Support to Police Violence Junius Ho has held at least one rally supporting Hong Kong Police and attended more rallies related to supporting the police. He publicly supports the police to use weapons that deals potentially more or lethal damage, such as tear gas and water cannon vehicles.  4. Insults through Nazism Means Junius Ho has called protesters "cockroaches" numerous times on Facebook and public speech. This method of describing protesters is equivalent to Nazism in 1930s - 1940s, where they used "cockroaches" to describe Jews in Germany to prepare for the Holocaust. Aside from calling protesters "cockroaches", he had called a women disagreeing him to "go masturbate herself". 5. Instigate Pro-Chinese people to attack citizens Junius Ho launched a campaign called "The Hong Kong Cleanup Day", calling others to "remove trash from 18 districts". In fact, this campaign was targeted to destroy the Lennon Wall all around Hong Kong and attack people who tried to stop the destruction, thus removing all anti-government&#39;s voice in the community. Such tactics were demonstrated on 14th September. On that day, some pro-Chinese people rushed to a shopping wall in Kowloon Bay, waved Chinese flag and sang China&#39;s national anthem. Afterwards, the pro-Chinese people attacked youngsters in the region who disagreed with their stances. One of the pro-Chinese team members were found to be a member of Junius Ho&#39;s election and volunteer team.   References (Vernacular Chinese only): 1. 策劃恐佈襲擊 — 頭條日報：721恐襲（即時新聞）；明報：何君堯記者招待會（明報新聞） 2. 恐嚇 — 東方日報：723抗議行動（備份）；香港01：良田村祖墳被破壞（備份）；立場新聞：何君堯警告朱凱廸（備份） 3. 撐警 — 香港01：撐警集會前記者會（備份）；YouTube：何君堯發言（連結） 4. 納粹式辱罵 — 香港01（備份） 5. 煽動攻擊 — 海報（備份）